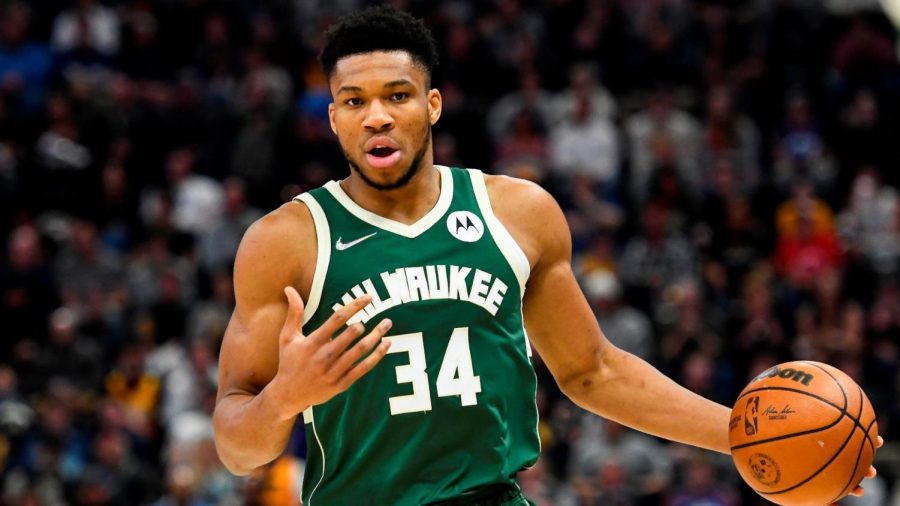 What do you consider to be tall for the average person? Whatever you guessed was definitely shattered by Giannis Antetokounmpo’s incredible 6’11 frame which includes 12-inch hands, a 7’3 wingspan, and 9-foot strides. Even with all of this size to control, Giannis still dominates the NBA with his athleticism. Giannis is the best player in the NBA because he is a great leader and a complete player.

In Giannis Antetokounmpo’s young career, his recent success has clearly shown his leadership skills. For example, he was named the NBA MVP in the 2018-2019 and 2019-2020 seasons (only 11 other players have ever won back-to-back MVPs). He has been named to the last 6 NBA All-Star games and the last 5 All-NBA teams. In the 2018-2019 and 2019-2020 seasons, Giannis led the Bucks to first place in the NBA for the regular season. Antetokounmpo’s regular-season accolades are obviously amazing, but true leaders produce in the playoffs when their back is against the wall. With Giannis being the reigning Finals MVP and NBA champion there are only positive comments to make about his willpower. Teammate Bobby Portis states, “to come in and get 40 points back to back and pretend like he didn’t even hyperextend his knee… He’s a relentless player, he’s a great leader, and it’s fun to play with him out there,” (EssentiallySports). This shows how Giannis’s motivation is even larger than his talent, which is also world-class. But where does a drive so powerful come from? In 1994 Giannis was born in Nigeria, but moved to Greece when he was three. Because he was an immigrant, his family was never seen as Greek citizens, and his parents worked hard jobs for little money. Giannis’s days would consist of no breakfast, school with no lunch, practicing basketball until 11 pm, and coming home and eating whatever small meals his parents could afford for him and his 3 brothers. Giannis’s family was also evicted from multiple homes, but Giannis was able to use his experience from these problems to help his much smaller adversities on the basketball court. While lifting himself up in his adult life after his childhood difficulties, he is able to spread his positivity and wisdom to his teammates, leading to wins for the Bucks.

With his huge but athletic build, Giannis Antetokounmpo has the most well-rounded skill sets in the NBA. Although crafty players like Steph Curry are great shooters, bigs like Joel Embiid control the paint for rebounds, and visionaries like Chris Paul distribute the ball and rack up the assists, Giannis is the only player in the league who is elite in all three categories because he is a big man who can move like a gymnast (not to mention his lockdown defense, 2019-2020 DPOY, 4x NBA All-Defensive team). Bleacher Report raves, “The agility it takes to Eurostep the way he does is something most big men could never dream of. And his spin move is like something out of Madden football.” This shows how apparent and ridiculous his athleticism is, which is why his nickname is “The Greek Freak.” This season he currently averages 29.8 points, 11.5 rebounds, 5.8 assists, 1.1 steals, and 1.4 blocks per game. Giannis’s stats explain how he is definitely a player who does everything he can to help his team win, and he would clearly be any coach’s first choice to have on their team. Giannis’s variety of basketball strengths are more than enough to take over any game in the NBA.

Some critics of Antetokounmpo think that even with his championship last year, Giannis is still young and unproven. ESPN ranks Kevin Durant as the number 1 player, with Giannis as the number 2 player in the 2021-2022 NBA player rankings. While discussing Giannis’s paint skills, ESPN’s reasoning was “room for improvement there, too, if he works on his back-to-the-basket post moves” The fact that every player has room to improve is understandable, but ESPN also states, “Antetokounmpo was the first player to average 20 points and shoot 65% in the paint in a single postseason. In the Finals he was even more lethal in the paint, shooting 75%. Simply put, he is virtually impossible to stop once he gets inside.” If he is destroying NBA records, how can he be told he is not doing enough in that specific area? Also, ESPN ranking Kevin Durant high on their list is understandable because he is one of the greatest scorers in NBA history. But Durant has never won a championship without a stacked team. His championship Warriors teams had multiple superstars including Steph Curry, Klay Thompson, and Draymond Green,  that trio had won a championship before Durant even got there. ESPN also says that Kevin Durant “carried” the USA Olympic basketball team to their gold medal in 2021, but 402 of the 510 NBA players are from America. In 2021, team USA was filled with stars who had 37 combined NBA All-Star appearances (Giannis wasn’t playing in the Olympics because he preparing to play in the NBA Finals). Furthermore, when pondering Durant’s chances of winning an NBA championship, ESPN questions, “Will everyone stay on the floor? Durant, Kyrie Irving, and James Harden” So does that mean Durant is the best player, or on the best team, needing to be helped by other superstars? Giannis is surrounded by good role players who play above-average defense, but if he wasn’t there they would be a bottom 10 team. Obviously, Antetokounmpo’s impact is much greater than anyone else’s in the league, proving the point of his superior status in the NBA.

In conclusion, Giannis Antetokounmpo’s team lifting qualities and wide range of basketball talents make him the best player in the NBA. The only question for Giannis now is, will he three-peat as MVP and earn back-to-back rings? If his dominance continues throughout his career, he will have a chance to be regarded as the greatest player in basketball history.